True stories. The lovely and the wicked.
Leave a comment

There Is An Opossum Outside My Apartment

Posted by vodkasavant on March 7, 2013 in Uncategorized 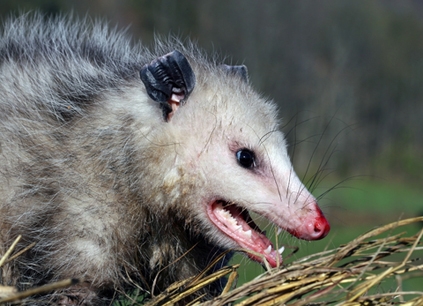 An opossum lives in the shrubs near my apartment building.  Recently, he climbed up into the trees near my balcony on the second floor.  I can only guess that he is calculating his entrance into my apartment, where he will promptly scare me until my bowels are vacant, then bite into the fleshiest part of my foot until I bleed profusely.  This is merely speculation.  However, if/when I  encounter said opossum, I will not go down without a fight.

I imagine our encounter will go something like this:

The opossum enters my apartment through the door that leads to my balcony.

I spot the opossum immediately.  Then, I tell him that I will kill him.

I chase him into the corner of the kitchen, behind my table, near my cheap guitar amplifier.

I lay a small Gala apple on the ground in front of him.  “For you,” I offer. He darts out of the corner, licks his lips hungrily and pounces on the apple.

I trap him with a Trader Joe’s bag and hold the closing with my foot. Then, I set the amp and one of my kitchen chairs on the opening of the bag, so he can’t escape.

They’re is rustling inside the bag, along with a harsh screech. The opossum is trying to bite his way out of the bag.  He starts to break through. I can see his beady eyes. I dash to my hallway closet, grab my Tres Semme hair spray and drench him with it. Notes:  This usually helps asphyxiate most large bugs; I figure it might do the same to larger creatures.

He weakens.  Then, he bows his head, in surrender.

I delay my assault.  We have a heart-to-heart. He asks if I have any scotch.  I say, “No, but I have Stoli.  Will that work?” He nods affably.

I pour the vodka into two rocks glasses, then add a couple of ice cubes and lemon wedges.  He leans back against the wall to savor his refreshment, then tells me his name is Barry. As he sips the Stoli, his bright pink tongue darts between his razor-sharp teeth.  His eyes assure me that he is calculating something.

I put on some music. T. Rex comes on, then Bowie, then Warren G. He tells me about his “gangsta” phase in college. We have a few more.  He is clearly a weak drinker.  He blathers chaotically about his life–stories of how his father was never around, how his mate  ran off with his best friend, his three kids–one of which he isn’t the father, and the time he almost got hit by a Ford Fiesta.

He relaxes and rolls onto his back, thinking that he’s safe.  I stand up and tell him that I need to mix another cocktail for myself.

Then, I reach into my utensil drawer, grab a chopstick and…in one swift move, stab him with it.  He is squirming and making small gasps. The chopstick has clearly put him out of commission. But he’s not quite dead. How am I going to sleep tonight knowing there’s a dying opossum in my kitchen?

I decide to end this once and for all. I head for the cabinet over my refrigerator.

As I reach for a hammer in the cabinet, I hear him begging, “No! No! Please…I’ll do anything. I won’t bother you again.  Please!  I…was…just…hungry…” He starts coughing. His whole body contorts, and he winces in pain every time he coughs.

Something in his voice strikes a chord with me.

“Sorry, but I have to do this.”   I pound him in his evil, ugly face with the hammer that my father gave me when I first moved out of my parents’ house.

The opossum twitches wildly as he lets out a long, exhausted cry. Then, he stops. No sound. No breathing.  Nothing. The opossum is finally dead.

← Listen Up: Passion Pit’s “Carried Away”
Whiskey, Prayers, and PTSD →