True stories. The lovely and the wicked.
Leave a comment

Jack McBrayer: The Mayor of Simpleton

Posted by vodkasavant on May 27, 2012 in Uncategorized 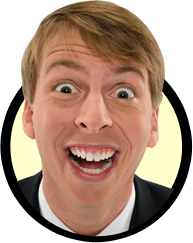 ‘What if there was a black bar on the lower half of your TV screen that kept you from seeing bad things—like nudity…or soccer?’ With his gummy smile, slight southern accent and guileless persona, Jack McBrayer is an unsung hero of hilarity. He steals every scene he’s in, no matter how small the role.  Optimistic innocence seems to come naturally to him—from rationalizing that ‘if God was a city planner he would not put a playground next to a sewage system’ in Forgetting Sarah Marshall to his role as page Kenneth Parson on 30 Rock, when he recounts stories such as the time when he picked up one of his pet pig’s piglets: ‘She went crazy! She bit off my nut sack … that I kept tied around my belt to feed the squirrels.’  Look for McBrayer in The Campaign with Zach Galifianakis and Will Ferrell, in theatres on August 10.  But for now, raise a glass of ‘hill people milk’ (a.k.a. booze) to this comedic underdog:  Today is his birthday.